Could Many Give Many?

Peer networks of small schools, governments, and any other interested parties banding together to be able to meet the minimum order.

Give Many XO minimums

So there’s an ongoing tension between small projects interested in using OLPCs and the guys over at 1CC who are too busy to really deal with a ton of small orders, regardless of the value of the particular cause, the built-in support it may already have, or any other warm, fuzzy reason. If the order doesn’t get up to the Give Many standard, it falls on seemingly deaf ears – all good reasons to negotiate a term sheet when navigating the GiveMany waters</a>.

I wrote about this general problem first in a long and academic paper when OLPC was still selling in only lots of a million laptops and only to governments. I railed on OLPC for missing the importance of the small but well supported projects in favor of unmanageably huge (but big-number) projects, and proposed a solution -- peer networks of small schools, governments, and any other interested parties banding together to be able to meet the minimum order.

The original problem has evaporated as the former launch partners never came through with their promises, as Nicholas Negroponte discussed at TED last winter, and the project has moved to smaller installations which have been difficult enough to manage without an implementation strategy. 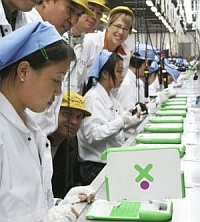 Production scales, why not giving?
Naturally, my original peer-network idea has a ton of complications -- this mixed bag of organizations has to overcome coordination problems, be able to effectively and timely communicate (involving both language issues and technical connectivity issues), address financial (and money-sharing) problems, and in general be well enough organized internally, as well as a group, to make this happen. Luckily, the creation of that social network and trust building is similarly important in the support of a laptop program once the laptops get delivered -- the participants can share curricula, best practices, technical peer support. The technical obstacles they had to overcome imply that they have some connectivity (and, probably, access to electrical power), and whatever fund-raising they were able to do to afford the laptops will also (hopefully) mean that they have sustainable support from their communities. This general concept was tried by the IADB in a top-down fashion, as they negotiated an agreement putting a handful of Central American countries together on one bid, but as far as I can tell that was a non-starter.

This is all a long-winded way to get back to our current problem; individual funders and NPOs/NGOs who aren't able to or are even interested in enough laptops to use the Give Many program, but a growing support network for grassroots OLPC programs in the "Post 1CC" era.

Also, we have the potential for arbitrage courtesy of eBay to catch some of the slack. OLPC XO-1s have been selling at close to $300 on eBay since since Day 2 of the original G1G1 (actually the price has been in decline since G1G1 it seems).

At Give 1000, the cost per laptop is $260 - that's just 10 programs wanting 100 laptops each. $26,000 isn't chump change, but it's cheaper than any other way to get 100 laptops for a school, community or organization. We know that Ken Hargesheimer wants 150 XOs, and I'm sure there could be homes for 850 other XO laptops at $260 each (with some additional shipping overhead to re-distribute the lots). And of course, until G1G1 returns (rumored to be September) you could potentially eBay a few unwanted XOs...

Is this realistic? Are there enough interested-but-frustrated parties to assemble an order for 1000 XOs? Would OLPC take offense at this slightly tricky order? Is the random 3-6month order delay acceptable for the potential buyers?