What does a Senegalese technology implementation project from 1982 have to do with One Laptop Per Child? Well, you might be surprised. At the same time that the French government was launching their successful (but quickly overshadowed by the Internet) Minitel project, they were also supporting a constructivist-based computer-learning project, using Apple II computers with the LOGO programming language/learning tool. 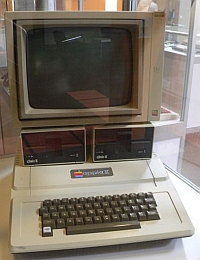 Le Centre Mondial pour l’Informatique et Ressource Humaine, provided Apple II computers and the LOGO programming language to schools near Dakar, Senegal under the direction of Seymour Papert and Nicholas Negroponte. In the MIT Technology Review magazine, No. 13, May/June 1983, Dray and Memosky’s “Computers and a New World Order” article reviewed the project:<blockquote>The Center intended to use microcomputers to take computing to the people through educational workshops in both the developed and the developing world. Field projects were set up in France and Senegal… It was to be an international research center independent of all commercial, political, and national interests.</blockquote>One Laptop Per Child trumpets this experience in its Progress page of its website.<blockquote>In a French government-sponsored pilot project, Papert and Negroponte distribute Apple II microcomputers to school children in a suburb of Dakar, Senegal. The experience confirms one of Papert’s central assumptions: children in remote, rural, and poor regions of the world take to computers as easily and naturally as children anywhere. These results will be validated in subsequent deployments in several countries, including Pakistan, Thailand, and Colombia.</blockquote><div style="float: right; margin-left: 10px; margin-bottom: 10px;"> 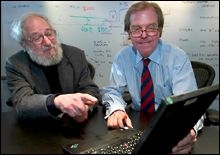 S. Papert & N Negroponte</div>Now while the children took to the computers, the lab itself didn’t fare well. The Technology Review conclusion after just a year from product launch?:<blockquote>Naturally, it failed. Nothing is that independent, especially an organization backed by a socialist government and staffed by highly individualistic industry visionaries from around the world. Besides, altruism has a credibility problem in an industry that thrives on intense commercial competition.

By the end of the Center’s first year, Papert had quit, so had American experts Nicholas Negroponte and Bob Lawler. It had become a battlefield, scarred by clashes of management style, personality, and political conviction. It never really recovered. The new French government has done the Center a favor in closing it down. </blockquote>Is this One Laptop Per Child project fundamentally different than the first, a whole new program destined for success? Or is it simply an attempt to try the same thing again, this time with upgraded hardware (the custom-designed OLPC instead of Apple II computers) and software (using the programming languages of Scratch, a successor to LOGO, and Python, instead of LOGO) on a global scale?

Published originally at OLPCNews -- the comment thread is over there.

Update: more resources and back story by Robert Lawler: https://www.lawler.us/robertw/LC/ED/13b.html