Being the geek that I am, I got a copy of Mark Warschauer's latest book, Laptops and Literacy, having been a huge fan of his insightful commentary on the "digital divide" in Technology and Social Inclusion. 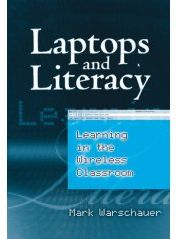 You might remember Mark from his New York Times article which he clarified here at OLPCNews, as well as his recent posting of a case study-like look at the Intel Classmate at the Newport Heights Elementary in Newport Beach, California.

Laptops and Literacy is a different kind of book. Where Technology and Social Inclusion was more of a framework or theoretical book, L&L focuses on case studies of one-to-one laptop studies in the United States, focusing on some school-based programs in California and the statewide initiative in Maine which has often been help up by the OLPC Foundation as a perfect example of the power of the one laptop per child model.

Mark stays away from the OLPC project in his books. Indeed, in all of L&L, he only mentioned OLPC in passing, excluding it from his US-centric study as "unsuitable to the U.S. Market" (p.152) (to be fair, the book went to print long before Alabama got interested), and obviously before the recent announcement of OLPC America. Regardless, he drives home some important points for the OLPC project by revealing what makes a 1:1 laptop program thrive (or not) in the U.S.

Maine provides the "flagship" 1:1 laptop program for the U.S. with a statewide mandate providing laptops to all seventh graders for six years this fall (and to all eighth graders for 5, and was extended to 31 of 176 high schools in 2004). Nevertheless, Warschauer and his team of graduates are the only ones with independent research on the Maine program.

Warschauer also draws heavily from 1:1 programs in California, where the average socio-economic stats (SES) is lower in the schools he users than the Maine schools. The California schools also have much higher diversity and language challenges ("Maine is 99% White and English speaking, California is a majority-minority state ... [and] has poorly funded schools with large class sizes" (p.30)). The California 1:1 programs are individual school projects, often with the financial support of the parents, ending in both laptop- and non-laptop classes of the same material. 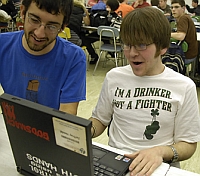 The shirt says it all

One to One Computing Results

Maine test scores have remained flat through their 1:1 laptop program, and there has been no evidence that laptop program improve reading or writing skills (or harm them). This can be interpreted as technology not adding anything to education, or as standardized tests failing to measure the skills learned using technology.

Laptop programs do improve students' abilities to deal with information and to collaborate, but fail to fulfill their promise of increased equality between high- and low-SES schools:Simply put, low-SES students and school that served them were often less prepared than higher-SES students and schools to take advantage of the full capability of laptops. Students in these schools tended to have fewer language and literacy skills, and this limited what they could accomplish with laptops. [...]

For all these reasons, the implementation of laptop programs at the low-SES schools was more challenging, and the outcomes more mixed.[...] These differences between low- and high-SES schools run against one of the common rationales of laptop programs, repeated to us many times by teachers and administrators in this study: Laptop programs help overcome educational inequality.

Yet such differences are consistent with what has occurred following other reforms involving technology or media, which though targeted at low-income populations are often best exploited by the more privileged sectors that can leverage their preexisting educational, social and cultural resources. This outcome became famous in connection with the Sesame Street educational television show (Cook et al., 1975) and since has come to be known as the Sesame Street effect" (Attewell & Battle, 1999 p. 1).Warschauer stops short of concluding that laptops increase the inequalities between low- and high-SES schools from a lack of quantitative and solid outcome data. He makes it clear that he believes computers will play a near-ubiquitous role in education in the future, unlike previous attempts to inject media technology into education, which have remained at the edges (TV, radio, and film for example). This inclusion of computers will not cause education reform by itself; "Laptops are not a magic bullet to solve our educational challenges" (p. 153). The examples and case studies woven throughout the book remind us that the laptops are tool, very powerful, incredible, "amplifying" tools, embedded into curricula and used in conjunction with other resources by a teacher to improve their student's education.

Laptops are not by themselves a full education system, and their usage depends heavily on engaged teachers, school administration, and sufficient support structures;"In one case, at Freedom Middle School in California, a number of the laptops were stolen or damaged; and lacking replacement funds, the one-to-one program ended." (p.150 ). Another example from California, Mr. Molina's laptop-enabled classes at River Elementary discussed at length for its innovation (p 43-48) fell apart when Mr. Molina moved to another school; after a year of unuse, they were redistributed by the school district to his new school for him to resume using.