Where the OLPC Project has intersected with the market; it has created new and valuable intellectual property (Mary Lou Jepsen, former CTO of OLPC, believes so strongly in the new technology that she's created her own for-profit company licensing the OLPC technology). The buzz around the XO has invigorated the ultra-mobile/small/low-power/low-cost laptop market; with Asus' Eee PC, the new Elonex, Fujitsu's newest LifeBook series, and of course Intel's already-existing ClassMate has received much more attention of recent.

BusinessWeek's Bruce Nussbaum has already compared the OLPC to the Classmate from a BoP approach; but only focused on education and implementation:

But one absolutely critical issue that trumps all the others is education—how best to teach kids at the bottom of the pyramid. So far, the conversation about XO has been dominated by geek stuff, not educational stuff. [...] But where’s the debate over digital lesson plans in local languages, team teaching, long-distance education? [...] Intel may be doing better than the XO. A version of Intel’s Classmate PC is already on sale in Mexico and elsewhere and it is—this is key—bundled with educational material software and teacher support. 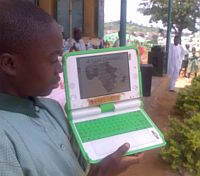 That’s all well and good, but it continues an assumption that I’m trying to open up for debate – is the educational system the best way to distribute the OLPC XO laptops to create sustained development? What would the the OLPC project turn into if changed to a technology-diffusion, bottom of the pyramid approach with the overall goal of improving communities by closing the “digital divide”?

First off, there are some immediately obvious downsides. The project would not be a one laptop per child; egalitarian, education-focused project anymore, which is a big punch in the gut to the OLPC vision. It wouldn't necessarily be a child-only approach -- children could be encouraged with various incentives, but once you go to the market, turning away customers over 18 won't fly for very long.

However, the current situation is limited pilot projects in mostly urban situations, mostly schools which are on-grid with Internet access available, with Peru leading the way in pushing for remote-rural tests. So a market approach loses something, but might make up for it in spread and long-term impact. A bottom-up approach is still very constructivist; and doesn't necessarily have to lose it's child-centric flavor. If the underlying goal is closing the "digital divide" and helping these countries; what you need is a self-sustaining project, not an infinite series of projects and recurring costs to the government for new laptops.

So what does it take for technology projects to self-sustain; leading to community development? You need to create a technology that individuals in the community will adopt, learn, and expand, and a process to enable this. This is technology diffusion as much as ICT4Dev -- you want to find early adopters who will spearhead technology adoption. If you look at similar technology diffusion projects that have been widely successful, some exciting possibilities come to light.

The first example that always gets dragged out when talking about technology diffusion in developing world contexts is of course the cell phone. The wildfire-like adoption rates of cellular technology are amazing, even (especially?) in developing countries. The Grameen (Village) Phone project has found a micro-credit solution to bring in even those markets unable to normally afford a phone by extending credit (combined with training on using the phone) to individuals in a community, who then use the phone as a business, charging people to use it to call family or government services in remote cities, find out the market value for their crops, and so on. The profits from this micro-enterprise repay the low-interest loan and improve the quality of life of the entrepreneur.

The OLPC costs a bit more than a cell phone, unfortunately -- but the same microfinance concept has been successful in costlier technology projects. In Nicaragua, a local firm called TecnoSol has partnered with an energy corporation, E+Co, to sell photovoltaics, (PVs, solar power cells) batteries, and training to rural farmers and entrepreneurs through a credit scheme. These PVs can cost up to $3,000 for the more powerful (and larger) cells; but for much of rural Nicaragua, there's simply no grid access, and a PV can mean light, water pumps, and even refrigeration for a farm or a store; which can greatly expand business potential (if you're the only place in walking distance with a cold beer, you will meet with success). So this model can scale up beyond relatively cheap cell phones to more expensive objects. This UMich study (PDF) goes into more detail on the Tecnosol/E+Co partnership.

These projects have many factors contributing to their success, but the underlying key for both is local knowledge -- what local demands are going unmet that could turn enough profit to repay a loan and create a small business? With the Grameen Phone, community members had a variety of different needs that they were willing to pay small fees for, if a phone was available to "rent" time on. In Nicaragua, providing electricity in an area with no access to the power grid has obvious benefits, many of which can be monetized.

The same entrepreneurial idea can feed development, using the OLPC technology instead of (or possibly in addition to) cell phones and PVs. Set up a group of in-country micro-lenders who can walk someone through the usage of the OLPC XO laptops, evaluate requests for laptop loans with local situational and social knowledge, and help with initial setup. Provide micro-loans to individuals with an idea of how to use the laptop in a way that could generate enough revenues for repayment and self-employment. Work with local social customs and systems to find the best way to create social pressure for loan repayment (only x amount of money is available on a rotating basis?), as well as adapt to local markets and needs.

Perhaps some business ideas will also require Internet connectivity -- can this be rolled in as an additional service to the OLPC via a GPRS/EDGE/etc. cell phone connection, a local ISP, or some other solution (satellite uplinks would probably be too expensive unless they're shared with others; perhaps one could get installed and shared among a geographically close group of XO entrepreneurs via the mesh?). Perhaps some plans would also need an energy source to charge the laptop (the yo-yo charger can only do so much) that could be provided or supplemented with solar or wind energy and a UPS battery backup? Maybe a small portable printer (and ink?) is also needed for some ideas -- it all depends on the idea and the local market's need and ability to pay for the services balanced against the cost of the items, marginal costs of ink/paper/cell phone data costs, and how low micro-loan interest rates can be safely set. 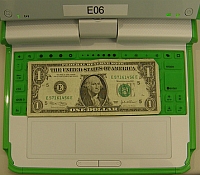 Can the OLPC turn a BoP profit?

The bottom-of-they-pyramid microfinance approach doesn't even have to drop the education focus. While the returns on education are much to slow to repay loans effectively in most cases, grant programs or other implementations could focus on child usage. For example; the XO could be on sale for anyone; but only young entrepreneurs could qualify for the micro-loans, and they'd have to provide some explanation of how this would fit into their learning. Schools or education-oriented civil groups could to buy on credit in bulk, provided they could support both an educational aspect and a profit-making aspect. Grants could be available to even younger children participating in educational programs, skimming profits off of the loan system and successful entrepreneurs in a new G1G1 style program.

Below are a few ideas (presuming some form of Internet, probably cell-phone-network enabled) that could combine the OLPC, community development, and education with making a bit of profit. There are a million other possible things to do with the laptop, using its built in hardware and software tools as well as adding other open-source software to it, so this is by definition an incomplete list. Only local agents can really know what the local demand for OLPC-related services would be, so take these as very basic, generic ideas:

So, readers -- can this work? Does this "cheapen" the laptop-as-educational-revolution? Does that matter if a more substantial and sustainable development project emerges?