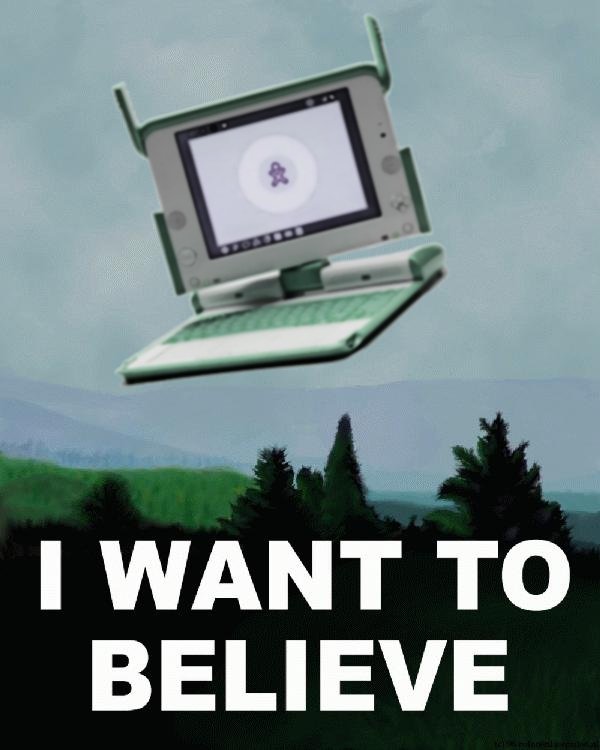 This entry is the beginning of a four part series, "The XO Files: I Want to Believe in the XO" Read Part I here, then Part II, The New 4PC Market, and its Failings, Part III: Re-imagining the OLPC Distribution, and Part IV: New Years Resolutions for 1CC.

The XO Files: I Want To Believe

Concern over the original distribution plan was what got me writing for OLPCNews.com. The belligerent anti-pilot-project attitude, the requirement to buy the laptops in lots of 1million units, and the hushed discussions about the costs beyond the "$100" laptop. What has OLPC done and what should it continue to change to make XO deployment smoother and more successful?

Rapid, bulk deployment is not a good model to introduce technology, particularly in a resource-constrained environment. If you look at case studies of technology diffusion or successful ICT4D deployments (the Grameen Bank Village Pay Phone Project for example), you see the very social process of technology adoption, as people judge their usage of a new technology based not only on features and promises, but about lived experiences of their friends and networks. Duncan Watts's Six Degrees takes the network theory approach to this, and Rogers’ Diffusion of Innovation drives it home with extensive case studies, and the classic "Diffusion of Innovation" graph:

Among individuals, there is a normal curve distribution of the groups in any diffusion process, which are innovators, the creators of new technologies; early adopters, those who are most likely to begin using a new technology first; the early majority who will adopt next, and then the late majority and laggards. The most important actors in innovation diffusion are the change agents, who are generally external entities bringing new technology to a community and the opinion leaders within each community, who have immense influence over the adoption of a new technology by their peers.

Not to belabor the point, what can you do with a million laptops?. It's an overwhelming number to absorb into an educational system without any prior experience with the OLPC XO, not to mention 1:1 laptop usage or computing in general. Add the fact that both the hardware and software were (then, slightly less so now) new and untested, and you're externalizing a lot of risk onto governments, which are most likely already in debt for other projects that haven't paid off as promised.

Even accepting that risk and going forward, pilot projects serve more purposes. Pilots do not just to make sure the technology "works" and that there's some return on the investment (in the form of improved test scores, attendance and participation, etc.). A pilot project can and should also develop local best practices, curricula, and on-the-ground educators with experience using the XO in a classroom. To be fair to OLPC, their plans in 2006 were to open up the distribution to a wider audience (this hasn't quite happened as yet) after the initial launch:

The key to the OLPC vision will be scale, which is why the group will initially make the computers available only to governments that place bulk orders of more than 1m units. The seven launch countries are expected to order up to 10m units in 2007. With time, this will change. “After the 2007 launch, as little as eight to 10 months later, we will open this to all non-governmental organisations, countries, states within countries, right down to school districts,” said Mr Negroponte. (Limbach 2006)

Unsurprisingly, this initial approach fell through, and they've moved towards the follow-on plan. After a set of handshakes, the orders didn't materialize, and after telling people who wanted to run pilot projects "...screw you, go to the back of the line", Nicholas Negroponte and OLPC have been recently implementing much more reasonably sized pilot projects, instead of waiting for an implementation miracle.

Ideally, OLPC would have started out pitching hundreds of small pilot projects, and engaging not only governments but also NGOs, individual schools/school districts, and even communities. The project was exciting enough and the per-unit cost low enough that many of these organizations would have engaged and become (hopefully) champions, local experts, and global examples, leading to more and larger deployments in a more organic and long-term sustainable fashion.

The current situation with modestly sized pilots in a manageable number of countries is a much more sane approach. This is revealing some of the weaknesses and gaps of the technology (as there always are), and is generating the highly important localized content. Still, there's much that could be improved with very little effort.

Before G1G1, you had to be a hotshot software developer committed to helping out with Sugar projects to get an XO to work with. This helps with the technological side of the equation, but why not send some units to top-notch educators around the world to start exploring use cases, creating curricula modules, and sending feedback on classroom-level usability? The dream of the XO as a "Trojan Horse" entering the classroom as a textbook replacement but empowering children to use it at home for learning and exploration is a wonderful vision. At the end of the day, however, the teacher is the gateway to the classroom, and if he or she suspects the children are using the XO to chat during class, cheat, or so on, they will rapidly get banned. As such there has to be some teacher training on how to leverage the XO and be involved. G1G1 enables some educators access to the laptops, but some free (or at least at-cost) XOs to more educators globally could only spur more interest, open, shared curricula plans, and community efforts.

The restriction of G1G1 2007 to North American donors was unfortunate, but hopefully G1G1 2008 will be more open. Creating a global community of "early adopters" is key, beyond merely adding to the cadre of software developers (of course, whether that matters now with the move towards Windows XP is another question). A global community will find innovative ways to use the XO, contribute to debugging, and content translation and creation. At the very least, the experience will reveal remaining gaps in the software and UI through common tech support problems.

Again, OLPC has made some great strides in addressing their distribution problems – running smaller pilot projects; the initial G1G1, though hasslesome, increased the user community; and G1G1 2008 looks to be even better. There’s even rumors of an OLPC partner in India looking at selling OLPCs with cellmodems.

OLPC needs to go further, to match innovation in distribution with their innovation in design. The goals are to improve education worldwide at a fundamental, constructivist way. The needs are high production runs to keep the costs low (ish).

An ongoing G1G1 with the ability for anyone in the world to order an XO would be a good start. OLPC might have to be careful managing the non-profit side of that, but worst case is they spin off a small, focused for-profit company that manages selling and limited support -- which can provide even further feedback as to which features users find interesting and what are common requests (though, at the end of the day, I feel strongly that the XO should retain its design focus on low-cost and education-in-developing-world needs).

Another option is to refactor the OLPC as a "base of the pyramid" style technology, selling it through financing and providing training to small businesses and entrepreneurs interested in bringing a portable cybercafe to their village, or in creating citizen media reports.

In short, OLPC needs to look at new ways to get the XO into more hands - more users, more educators, more children, more entrepreneurs, more developers. This creates a better infrastructure of content/guides/curricula for current and future deployments, helps in bug-testing, translation/localization, and creates a larger community like we already see in the global grassroots organizations and learning clubs, and on the OLPCNews forums. These might not all march to the tune of the 1CC drums, but might just be the crowd the XO needs to thrive.