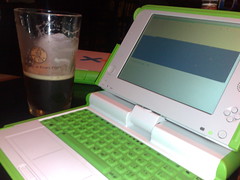 OLPC Upgrading - like an old defrag!Last Thursday, I upgraded my OLPC over some beers – sometimes, the best (and worst) ways to really test technology’s limits is while slightly inebriated. The upgrade (using a Microsoft Unlimited Potenial USB stick gimme as the boot USB.

The upgrade went surprisingly smoothly, and it even included a good chunk of activities, which saved a big post-upgrade time sink in Update.1

As for the new Sugar itself - first and foremost - amazing job. Great improvements on the UX/UI, suspend is fantabulous, the wifi connection system is much, much improved ... alt-tabbing, even copy/paste is better. This is a usable interface in ways that the previous stable builds were not, and it's hard to explain all of the polish that's been added -- the best I can explain is like moving from Microsoft to Mac or Linux/KDE -- things are different and a bit confusing at first, but then you realize that what's new is simply all the things you used to wish Microsoft did, and eventually gave up wishing. The interface provides a much more natural response to your actions.

OK, with the fanboy dedication out of the way, some things that annoy me:

Hidden/non-broadcast ESSIDs (wireless networks) are still a royal pain to connect to. Would it really be that hard to list the networks that are available but without ESSID and allow us to try to connect by entering the ESSID manually (in the GUI) -- even better, it could then "remember" the network association and ESSID going forward and have the discovered networks show up "starred" like encrypted networks do.

Speaking of starred encrypted networks, somewhere in the transition from Update.1 (When access to encrypted networks worked great) to 8.2.0, my XO stopped remembering the passwords. It stars "trusted" networks, but forces me to re-authenticate every time I connect, even when it's just coming back from a short suspend. It could at least remember the encryption type (ascii/hex/passkey, open/shared)??

...And so far, that's all my griping. The whole OS feels faster and more responsive, and just overall more put-together. It's a great relief to see such strong work being put forth even after the XP-on-XO hubub and the fallout at 1CC.

Update: it's remembering my work's hidden network so far!