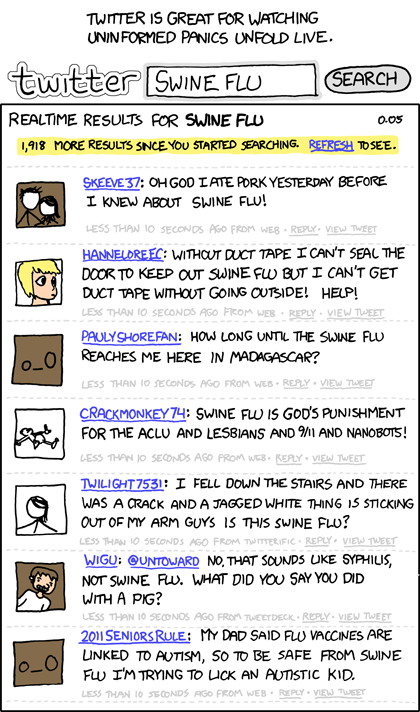 Everyone from XKCD to NPR has been blaming Twitter for spreading panic about the Swine Flu:

Who knew that swine flu could also infect Twitter? Yet this is what appears to have happened in the last 24 hours, with thousands of Twitter users turning to their favorite service to query each other about this nascent and potentially lethal threat [...] And despite all the recent Twitter-enthusiasm about this platform's unique power to alert millions of people in decentralized and previously unavailable ways, there are quite a few reasons to be concerned about Twitter's role in facilitating an unnecessary global panic about swine flu.

I mean, status updates like these are certainly cause for alarm:

Sure, Twitter is full of a mix of confused and uniformed people getting a bit panicky, and a whole lot of pranksters making light of the situation, but to call it out for spreading panic is to give traditional media too easy of a time. To be fair, NPR did note that “media networks are doing their best to spice up an already serious threat”, but a full-page photo of a traveler clutching a facemask to her mouth with “PANDEMIC POTENTIAL” in huge type across the photo is a far cry from “spicing up” the story - and this from the Washington Post’s “Express” paper, handed out at metro stations across DC every morning.

If you’re going to belittle Twitter as a valuable citizen-journalism site because of the swine flu, then I’m not sure where that really leaves us in terms of any form of media, as traditional outlets have been banging on the panic drums just as hard.

Twitter remains a valid information source - but you have to filter out the noise. Remember that Twitter scooped the Mumbai bombings, certainly no less panic-filled, but quickly identifiable as a real phenomenon as multiple reports of the same stories started flooding the twitter stream.

The key difference with #swineflu is that we see reports of totally different, unconnected stories – there’s no building of a common theme or mutually supportive accounts, just lost and confused people discussing their fears.

Excuse me while I got home and have some bacon and wait for some sanity to return.